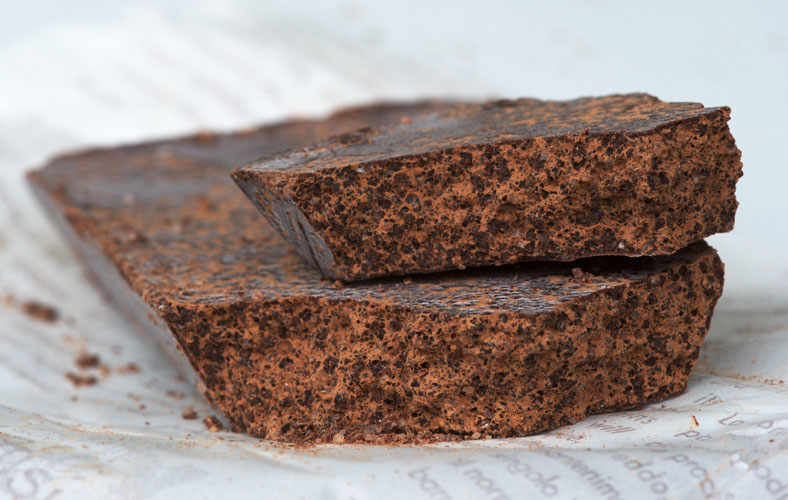 The Chocolate of Modica

The Chocolate of Modica is world-famous for its grainy and crumbly texture and for its coarse appearance, which retains all the characteristics of cocoa.

Link copied
To make the Cioccolato di Modica, or Chocolate of Modica, the cocoa beans are cold-processed in the same style as the Aztecs at the time of the Spanish conquest. The Spanish introduced xocolātl in the County of Modica from Mexico. Xocolātl was obtained by crushing the cocoa beans on a stone known as metate. This practice allows to bring out the cocoa butter and to obtain a grainy paste. The manufacturing of the chocolate of Modica never went industrial. The chocolate of Modica has an uneven brown, crumbly paste and a roasted flavour with slightly bitter nuances. It can be enjoyed in solid blocks or in dissolved in a cup of hot water to fight the winter’s cold. Nowadays, the production of the Chocolate of Modica is regulated by the guidelines of the Municipal Designations of Origin – denominazioni comunali (de.co.) in Italian – which ensure and protect its territoriality. The Museum of The Chocolate of Modica opened in 2014.
There is no room for creativity when it comes to making a bar of Chocolate of Modica. Forget about modern, artistic shapes. The Modicans have used the same metallic mould for centuries. The paste is traditionally enriched with cinnamon or vanilla, although the original chilli pepper flavouring has been revived in the past few years, in addition to other aromas such as coffee, orange and lemon. The standard size of a bar of Chocolate of Modica is 12x4.5x1.2cm. It weighs 100g and is usually wrapped in greaseproof paper.
The cocoa paste is obtained from roasting and crushing the beans – locally known as caracca – produced in São Tomé e Príncipe. It is then heated with its own butter up to 40°C and sweetened with white or brown sugar, and flavoured with cinnamon, vanilla, ginger, chilli or even lemon and orange peel. The content of cocoa is 65% minimum, even in the more classic versions. However, the purer versions contain no less than 90% of cocoa. The old adage “the simpler, the better” could not be more apt. No vegetable fats or additives are used in the making but its own butter, and simplicity can be in fact savoured in the final chocolate bar. The Chocolate of Modica awaits to be awarded a Protected Geographical Indication (PGI) by the European Community. In the meantime, the Ministry of Agricultural, Food and Forestry Policies has officially recognise the Chocolate of Modica as a Prodotto Agroalimentare Tradizionale, a caption for traditional local foodstuffs.