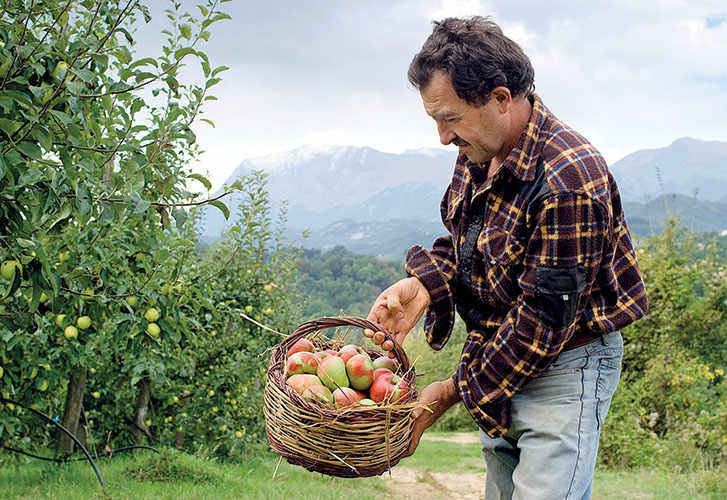 The Pink Apple of The Sibillini Mountains

In the Monti Sibillini National Park, at the heart of the Marches, a project has managed to revive a long-forgotten fruit, the Pink Apple.

A Slow Food Presidium since 2000, it is now grown by about twenty farmers. The Sibillini Mountains are an area in the Marches encompassing a dozen municipalities across the provinces of Fermi and Ascoli Piceno. Here, at an elevation ranging from 450 to 900m, grows the Pink Apple, an ancient cultivar native to the area, after which it was named.

Characteristics of the Pink Apple of the Sibillini Mountains

The pink apple is small and irregular, slightly oblate and with a short stalk. Its skin is smooth, thin and pinkish. Because of their long-term preservability, they were chosen by herdsmen as provisions for their long journeys moving livestock from one grazing ground to another. The Pink Apple maintains its characteristics for over six months from the harvest. These apples are greatly appreciated especially in the local cuisine and they are especially used for cakes and desserts.

Since the Nineteen Nineties, thanks to the contribution of the Marches region, in collaboration with the Mountain Board of the Sibillini Mountains, it has been possible to save the species from extinction. Firstly, the biotype was found. The quest was long because no-one was growing this type of apple tree. The genotype of a few specimens scattered in the Park was used to repopulate the area, thanks to substantial investments and modern farming methods. In 2000, the Pink Apple of The Sibillini Mountains Slow Food Presidium was created. At the same time, the Association of the Pink Apple of The Sibillini Mountains Farmers was formed, aiming at support the project of recovery, production, protection and enhancement of the apple. The Presidium has established a list of guidelines for its production.