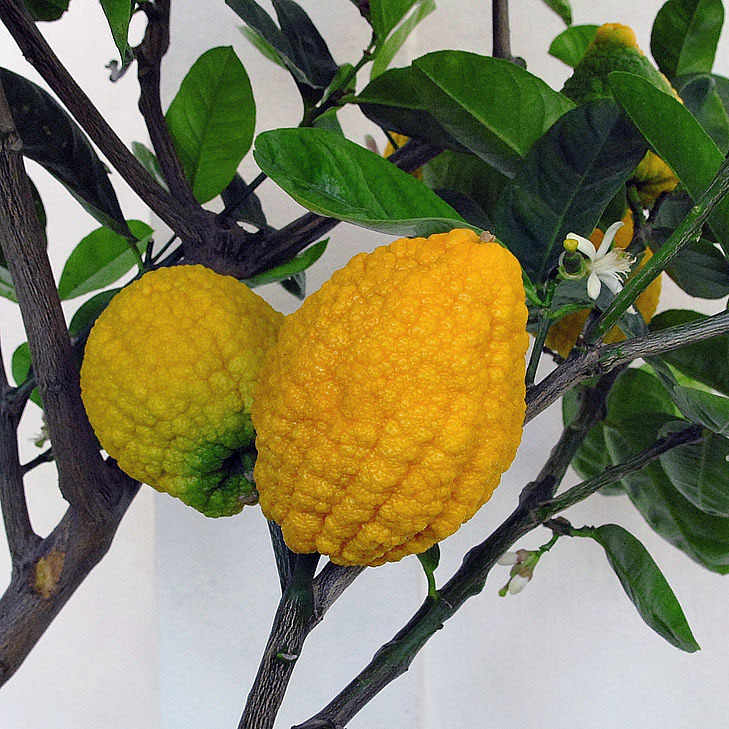 The Long History of the Citron and the Lemon

The former has a thick rind, the latter is extraordinarily juicy. Both native to the Eastern Mediterranean, they have been grown in Europe since time immemorial, for a number of purposes.

The citron is a shrub native to the sub-Himalayan region in northeastern India and northern Myanmar. Its fruits have a thick rind and very small and rather dry flesh. The white part of the rind is fragrant and juicy and it can be eaten to reduce the sourness of the flesh. The rind can be either smooth or rough and bumpy. Its shape is ovoidal and its shape has a 20cm length. The citron is used for its fragrance and for the medicinal properties of the volatile terpenes, like the lemonene, and the bioflavonoids, like hesperidin and carotene, found in the rind. The juice is an important source of vitamin C, produced by the ascorbic and citric acids. The lemon is most likely a hybrid between the citron and another unidentified citrus fruit.

Distribution of the citron

From East India, the cultivation of citron reached both westwards and eastwards, along with the lemon, although the latter was initially considered a variation of the former. By the 4th century BC, the citron had been introduced to Media (north-western Iran), Persia and the region between the Persian Gulf and Egypt. The Jews may have first come across the beauty of the citron tree and fragrance of its fruits during their Babylonian captivity. The Jewish Diaspora in the 1st and 2nd century AD spread the cultivation of the citron across the Mediterranean area, from Syria to Spain.

Distribution of the lemon

The first lemons found in the western world in the Etruscan-Roman era were most likely not dissimilar from the citron, especially as far as rind thickness and juice content are concerned. By the end of the first millennium, the lemon had become extremely popular among the Muslim civilisation for the many qualities of its juice, an excellent preservative, disinfectant, condiment and thirst-quencher. From Persia, the Arabs introduced the lemon to the Western Mediterranean, especially Spain and Sicily. From the 13th numerous production areas were created and lemons began being exported to Northern Europe. The Amalfi and the Sanremo Lemons are the most prized varieties in Italy, but the Garda Lemon, introduced by the Venetians, was equally important until the late Nineteenth century.