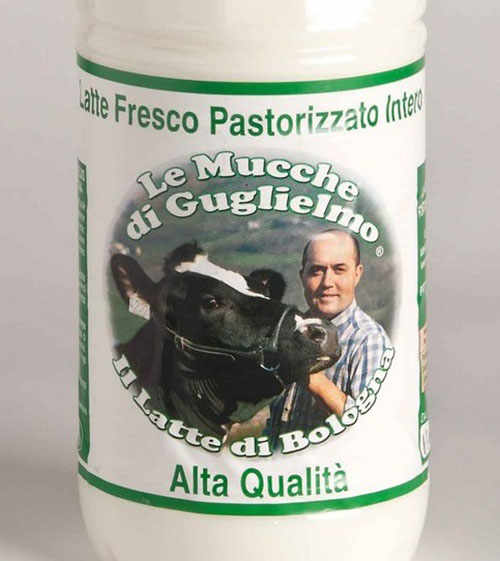 Guglielmo’s Cows, The Milk of Bologna

Guglielmo Fontanelli’s milk, high in nutritional content, is once again gaining attention as Guglielmo himself seeks to sell his milk for a fair price. Since 2007 he has forgone the use of the middle man and started selling his milk directly, with his own face on the packaging.

Link copied
The Story of Guglielmo Fontanelli
Guglielmo Fontanelli rears both dairy and meat cows in the hamlet of Trasasso, Monzuno, which sits 700 metres above the valley of Savena, a 20 to 25 minute drive from Bologna city. The air is clean and crisp, and the area is abundant with greenery. Guglielmo’s father was also a farmer, and in 1987 he purchased a farm-house with four to five hectares of land. It is here he began his milk production business with just ten to fourteen heads of cow. In October of 2000, he bought the Boschi company, and now owns between 170 and 190 heads of cow, producing 600,000kg of milk annually. 90% of the feed given to his dairy cows is nutritionally dense hay taken from the plains. In May, he specifically harvests grass from the plains as it has a protein content of 12%, compared to mountain-grown grass which is just 8-10% protein. On top of this, he also commissioned a supply company for a particular blend of nutritional feed exclusively for his calves, dubbed Vitelli Fontanelli, “Fontanelli’s Calves”.

The Nutritional Content of Guglielmo Milk
The reason for Guglielmo’s milk being of superior quality is that the milk is especially high in protein. The protein content of milk usually changes depending on the season. In winter, Guglielmo milk has a protein ratio of 3.4 to 3.6%, and in summer between 3.3 and 3.45%. However in both cases this is higher than the average, which is said to be between 3.2 and 3.25%. After milking, the milk is heated to a low temperature of 71°C and then allowed to slowly cool, and this gentle pasteurisation process preserves the quality and taste of the protein content. The high protein content not only has obvious nutritional benefits, but also improves the milk’s “processing quality”. For example, protein is often added to milk when making ice-cream in order to make it more creamy and soft. However with Guglielmo’s milk, adding protein becomes unnecessary.

Gugliemo’s Milk – Something Special
From 2007, Guglielmo decided not to outsource the distribution and sale of his milk, choosing instead to sell it directly himself. His pasteurised milk is sold in one litre bottles or five litre vats, and is delivered to Bologna City and the neighbouring areas. Sold as fresh quality milk, the label features Guglielmo himself with one of his cows. He personally delivers his milk to cafes, restaurants and ice-cream vendors. There are many stages of conventional milk sale; milking, collection, processing, storage, dispatch and distribution; and is just too drawn-out for Guglielmo. His aim is to shorten the process, and go back to a time when milk was sold directly from producer to consumer.