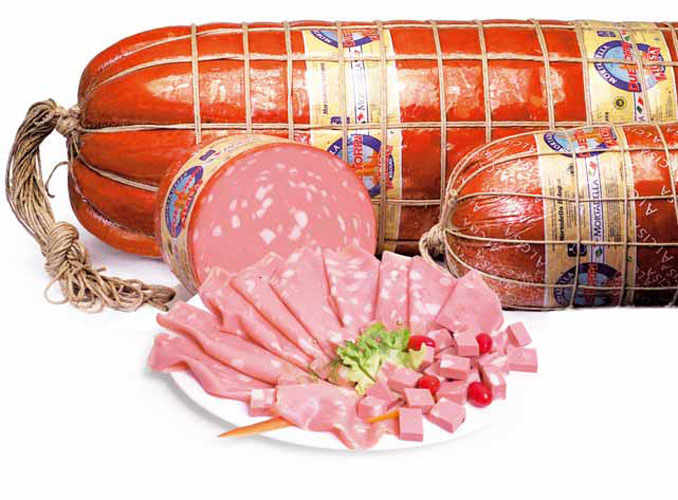 Recipient of a PGI in 1998, mortadella is a luncheon meat with a long history, traceable as far back as the Etruscan civilisation. Albeit strictly connected to the eating habits of the areas where is produced, mortadella is now manufactured with fewer fats than in the past.

Link copied
The name mortadella was in use already in the Sixteenth century, whereas the epithet bologna, which is different from the American baloney, dates back to 1661, when Cardinal Farnese issued a notice to regulate the production of the sausage, in the city of Bologna. From the late Middle Ages, the historical and literary mentions of mortadella become more and more numerous, and it is little surprise that it is one of the most popular Italian products and one of the first to be awarded a Protected Geographical Indication in 1998. Since 2001, mortadella has been protected by the Consorzio Mortadella Bologna, in collaboration with the Ministry of Agricultural, Food and Forestry Policies of Italy, against counterfeiters – especially American and Canadian. The Consortium comprises 31 farms, producing about 95% of the Mortadella Bologna PGI. Mortadella is still strictly connected to the eating habits of the production areas. However, new studies on the pigs’ genetics have led to a healthier recipe, with a lower fat content. The present-day mortadella has a high nutritional value, with proteins, minerals and unsaturated fats. The production disciplinary prohibits the use of rind and artificial flavourings.

Production – Mortadella Bologna is manufactured in an area encompassing Emilia-Romagna, Piedmont, Lombardy, Veneto, the Province of Trento, Tuscany, the Marches and Lazio. It usually has an oval or cylindrical shape. It is vivid pink on the inside with chequers of white fat. It has a strong fragrance, despite not being smoked. The parts of the pig involved in the process are the striated muscle tissue and the neck fat. The meat is processed three times into a creamy mush. This gives mortadella a velvety texture when sliced. The disciplinary allows small quantities of glucose and additives, but it clearly prohibits polyphosphates, food colourings and milk proteins. The peculiarity in the making of mortadella is the long cooking process, which occurs in dry-air ovens.

Nutritional value – The Mortadella Bologna Consortium is always endeavouring to keep up with the latest trends in nutritional science. 100g of mortadella are worth 288 calories, a lower count than a plate of pasta, and approximately the same as mozzarella fiordilatte. There are only 60-70mg of cholesterol in 100g of mortadella, just the same as white meat. The content of salt is also negligible. Last but not least, the high content in vitamins B1, B2, niacin, iron, zinc and other minerals makes mortadella an ideal food when doing sports and physical exercise.