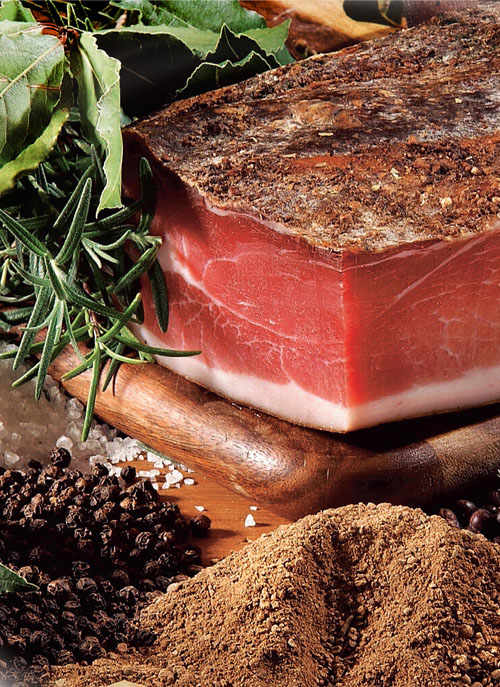 Speck has a more balanced and delicate taste than Northern European smoked hams, and, at the same time, stronger than the sweet hams of the Mediterranean areas. It is an expression of Alto Adige-South Tyrol, a land where North and South come together to create unique tastes.

Link copied
Speck Alto Adige IGP
Speck Alto Adige IGP (Protected Geographical Indication) is a slightly smoked and aged dry-cured ham. Its unique fragrance and taste are obtained with a traditional processing technique, which has been under the tutelage of the European Union since 1996. Because of the peculiar position of the production area, Speck Alto Adige has a milder taste than Northern European smoked hams and, at the same time, stronger than the sweet hams of the Mediterranean areas. The name “Speck” first appeared in the written form in the 18th century, but mentions of the South-Tyrolean smoked ham can be found in butchery manuals and the princes’ book of accounts as far back in time as the 1200s. Speck was dry-cured and smoked in order to preserve the meat for a long time. It was conceived mainly for family consumption and originated from the merging of two different meat conservation methods: curing, typical of the cured ham of the Mediterranean area, and smoking, typical of Northern Europe.
Nutritional value of Speck Alto Adige IGP
Speck Alto Adige IGP consists of 50% protein and fat, 48% water, minerals and traces of carbohydrates. Ageing enhance the digestibility of Speck, especially of the proteins, provided that it is carried out naturally and not induced. The fat component is 65% unsaturated fats. 100g of Speck contain 1.5g of salt.

How to assess the quality of Speck Alto Adige IGP
Speck Alto Adige IGP can be recognised by the quality mark and the little use of salt. Abundant salting is avoided in the South Tyrolean tradition of meat conservation. Speck IGP has a balanced taste, at the same time both flavourful and delicate. Consistency is another important giveaway: if the meat is too soft to the touch, that means it has not fulfilled the minimum required aging time. Speck Alto Adige IGP is best served warm. This way of serving ensures that both the lean and the fatty parts are tender to the bite, and that all its fragrance is delivered. Cutting is also paramount. A Speck slice must retain the appropriate amount of fat and spice crust.