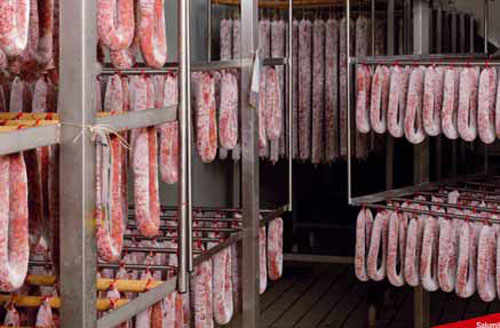 Lucanica, named after its birthplace, is a traditional pork sausage, whose mild or spicy taste is given by the addition of wild fennel or chilli pepper.

Link copied
History - Lucanica is the traditional pork sausage of Lucania, currently known as Basilicata. The Lucanians, who settled within and beyond the boundaries of the present-time region, were the first to produce this sausage, formed in a casing traditionally made from the intestine of the pig itself. Lucanica was well appreciated by the Romans, who took over the area between the 3rd and 2nd century BCE, and in the Middle Ages its popularity spread further up north, all through the Plain of the Po, leading spawning a number of cased meat with a similar denomination, such as the Lombardo-Venetian luganega.

How it is made - The Lucanica di Picerno is made with pork meat coming mostly from Emilia-Romagna. The shoulder, shoulder-butt and ham cuts of meat are carefully deprived of the tendons and extra fat and then ground not too finely. After salting, approximately 150-200 wild fennel seeds are added to the ground meat (1g seeds per 1kg meat). The wild fennel is an integral part of the landscape of Picerno and neighbouring areas. For the spicy version, 1kg of lucanica requires 1.5g of dried sweet and chilli peppers. Once it is ground and flavoured, the meat is cased in piece is cased in pieces of intestine about 40cm long. Each sausage will weigh 600g approximately, with a fat content below 30%. The sausages are subsequently left to cure in controlled-temperature storage for about twenty days. At the end of this stage, the sausage will have lost 40% of water. The resulting product will finally be deemed Lucanica di Picerno.

Protected Geographical Indication: a long-range goal – For over ten years the Lucanica di Picerno makers have been striving to obtain an PGI (Protected Geographical Indication). The European branding will reward all the efforts and protect lucanica from counterfeiting, especially by other Italian regions. Regardless of the numerous illegitimate versions produced in many parts of Italy and Europe, lucanica is deeply rooted in Basilicata, primarily in the municipality of Picerno, about fifty kilometres from Potenza, the capital of the region. In Picerno are three lucanica makers that stick to the traditional farming and manufacturing methods. The amount of lucanica produced in Picerno comes to about 80 quintal per year, at a wholesale price of 8.50-9 EUR/kg. Apulia gets 50% of the sausage production, followed by Campania (30%) and Lucania (15%). The export of the Lucanica di Picerno is on the rise.